I’ve often paralleled my parent’s ancestral home as the inspiration and foundation for the Biblical description of the Garden of Eden. As the Ice Age receded man became witness to the beginning, evolving, positive expression of active life and “saw that it was good”. If your doubtful, vacation Slovenia/Croatia for yourself. Pristine, plush, fertile and if you have a camera, picturesque. The immediate family at times behaves, as if active remnant of the Adam and Eve narrative, we are banished, try as we might, can not find our return to paradise. Thus far anyway, it’s been to no avail. This is the seed of my personal ambition and discontent, reaching for home where I belong but something always presents itself, to stand in my way. Can’t stop a coffin. “Miles to go before I sleep”. So it shouldn’t come as surprise, to any, that we are deeply religious, devoutly Christian and perplexingly Catholic. Consequentially, on our lands, one will find a surplus, of worshipping life and death churches. Perspective’s of religion and faith are drawn into focus, for our countrymen, when invaders, whoever the historical fashionable flavour, attack our body-politic and property, attempting to overtake us, because, well, we just happen to occupy a fantastic piece of real estate.

Our determined unity, exposes our superhuman stubbornness, against the face of vicious enemy oppressors, lust and greed. To criticize this hardened national trait, is deduced a ruse, to surrender our guard, expose a weakness and leave us vulnerable to destruction. We’ve seen it all, in every form, currently known, manmade method of manipulation, habitually. This day is without difference as the games continue unabated. Ask me how we got there? Probably equivalencies, of violence, barbarism, some assimilated others obliterated, with the help of plague and pestilence, or miracle of well timed flood, all under the guise of our own endurance. Life is a double-edged sword. Maybe one day we will tire of this gruesome, glorious, self assigned protection of heaven and dustbin ourselves into a footnote of history.

Everyone wants a finger or two in our pie and who can blame them, unless I inform, of how much blood has dropped to protect this popsicle stand. You begin to wonder if the Slovenian/Croatian people would better live without water, in desert, as cactus. Abundance can be a countries worst burden. And what, from all this, my fellow inhabitants of heaven are often a less than happy people and the difficulty is determining if this resignation to sadness is reflective of their own spirit or the drain of constant interference from larger than us powers. I beseech you, leave us to our own vices, for a few centuries, so we can observe ourselves.

See what I did there? Diplomacy and shrewdness are vital peacetime characteristics. Survival relies on the negotiated goodwill of our neighbours and the continued balance of struggling adversaries. The mission today is adapting to high-speed, high-powered technology and requires my people to be nimble, spry and insightful. Oh yeah, that’s not new either. New is when our children and innocent, live in an increasingly over-populated, hypocritical, dangerous world.

The wheel aside from it’s obvious usefulness as transport, was the first primitive significant mechanical form of communication and civilization. The wheel is what allowed me to paint so many walls, move all my crap, then call it temporarily home. Otherwise moving my belongings would have taken an unjustifiable length of lifetime. Hauling credenza by pack mule, through rough terrain, should still be considered tedious. I jest with obvious, but consider water rafts and boats as modes of transport for village, to hut, to modern day condo and that 500 years ago, most or all, remove a thoughtful handful, the world somewhere was ominously flat. I mean I would include myself as inept of any other conclusion. Only theorizing friends could save me from my ignorance. If you had a pulsating imagination, sharks would be of minor concern, compared to falling off our still undiscovered planet, into the abyss of waters unknown. Pythagorus believed the earth was spherical some two and plus a half thousand years ago. Aristotle and others were convinced, the world as round, including Ptolemy, such that it was studied as an institutional fact. However, if everyone was certain and not just speculating, why did shipbuilding take such a long time to develop, comparative to metal forging and weaponry capable of catapulting tons of projectiles? I guess we were busy, as usual, tormenting each other. True the oceans are deep, as they are vast, as is the unknown.

The year 2002 brought the discovery of the Ljubljana Marshes Wheel and official radiocarbon dating, places the wood and age of construction, in the range of 5200 years ago. It is considered to be the oldest and largest wheel ever found. The wheel is made of ash and the axel is made of oak, which implies they were discriminating tree properties and quality. Also interesting is they were able to define the origin of the trees used, to be close to the find area, of Marshes, some twenty kilometres south of Ljubljana.

Where’s the other piece of this wheel? Where’s the wheel from the other side of this axel? Where’s the piece that sat atop of this heavy-duty axel? Detectives please. I can speculate some obvious assumptions. The only surety, is that a fluke, plus accident of man, combined with the physical properties of nature, to await present day technology and provide our museum important insight of our history. What if found fifty years prior by a farmer and not as an investigation by educated trained professionals? Most certainly the unknown parts and participant’s have disintegrated and decomposed. 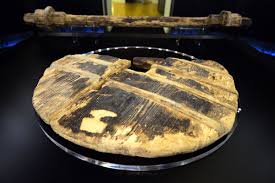 As evidence suggests, the conceptualization of a push-cart into existence, at a simultaneous period of history in the areas of Mesopotamia and Europe. Useful inventions spread uniformed through man’s consciousness. The first to adapt new information to it’s military and foresee an obvious advantage, most often turn this into a moral imperative to attack a perceived enemy. If successful in it’s military tactics, with limited damage to themselves, they will begin to create enemies to advance the greatness of their thinking. So it was and so it is. 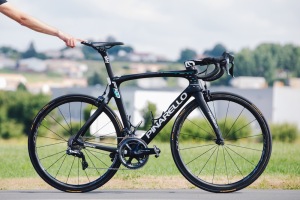 So in the name of goodwill and common purpose I suggest we develop a road race for the following nations of Slovenia, Croatia and Austria that can rival the Tour De France. For my personal interest I wish to incorporate any one or all of the following towns as passing route or primary stage. Prebold Slovenija, Podvolovljek Slovenija, Luce Slovenija, Bled Slovenija, Klagenfurt Austria, Graz Austria, Zelezna Gora Croatia, Strigova Croatia, Prelog Croatia, Pula Croatia.

I also advocate for a larger European multiple stage bike race that finds it’s finally, inside a new stadium extensively built with grandiose, over and including a preserved colosseum of Rome. With the last stage encompassing multiple laps over the border lip of the gladiator ring in front of an audience of no less than 50,000 people. This restoration of peaceful spiritual revival, of the most brilliant architecture of antiquity, would become a modern day enigma. It would also participate to preserve the living relevance of history, for future millennium generations of humanity. 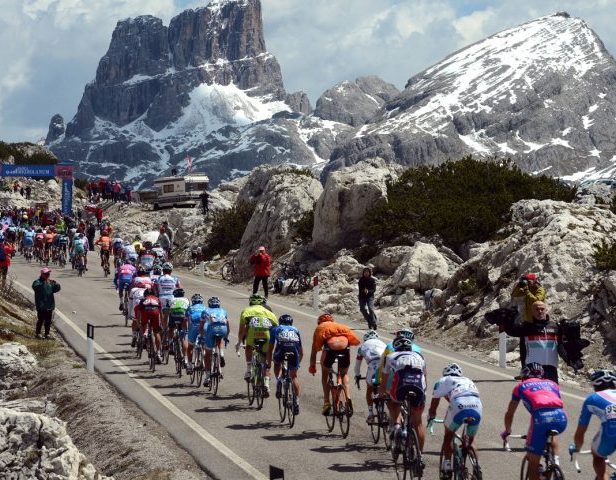 Italy’s Ivan Basso (Liquigas – Doimo) arrives in the Verona arena just after crossing the finish line and winning the 93rd tour of Italy on May 30, 2010. Italian Ivan Basso claimed his second Tour of Italy title as Swede Gustav Erik Larsson won the 21st and final stage of this years race, a 15km timetrial around Verona. The victory completed a remarkable turnaround for Basso who was banned for two years in 2006 for his involvement in the Operation Puerto scandal. AFP PHOTO/Luk Beines